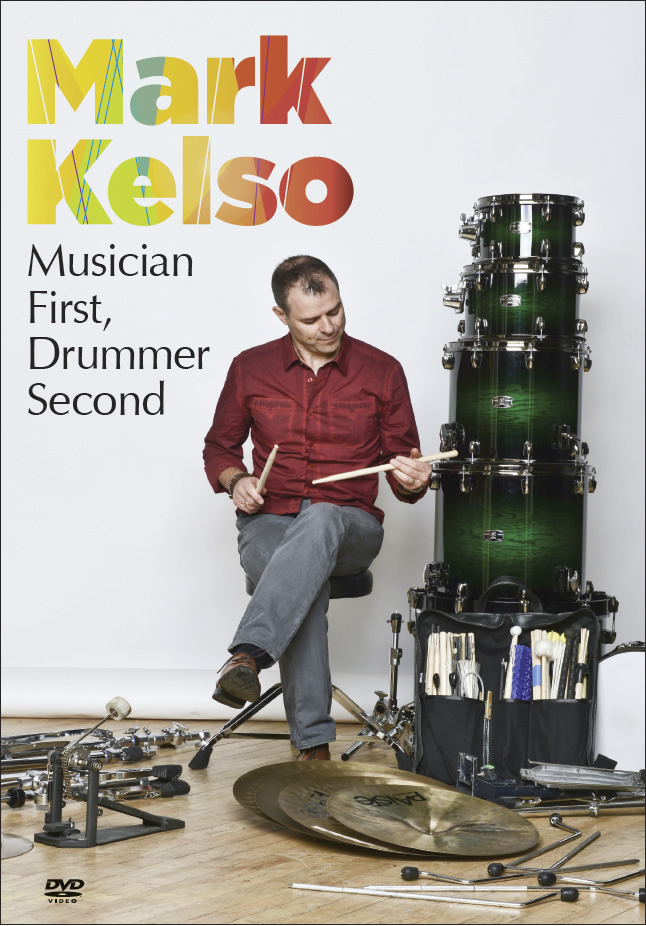 Once you make your purchase via PayPal and we have received the order, a link will be emailed to you asap. The download size is around 4GB so it may take a little while to download if you aren’t on a high speed internet connection.

Mark Kelso’s Musician First, Drummer Second is about how to be a good musician on the drum set.

Filled with good common sense advice for players of all ages from beginner to pro, lots of demonstrations, and some amazing band performances.

A great tool for all players!

“Musician First, Drummer Second is where my 40 years of drumming experience has led me to today.” Says Irish/Canadian drummer Mark Kelso, (Currently head of the Humber College percussion dept in Toronto). Mark discusses his ideas on how to approach being musical on the drums and to set aside the myth that drummers are not musicians. There’s plenty of info and demonstrations on Mark’s concept of playing time, time feel, groove, playing at really slow tempos, non-musical influences, versatility, reading AND interpretation of charts, self motivation and a unique twist on metronomic displacement. PDF’s are included as well. This is intended to be helpful for the beginner student right on up to the professional player. Says Mark – “There’s something for everyone in Musician First, Drummer Second”.

“Mark Kelso is one of the most versatile and grooving players I know.”

“Mark sent me a clip of his new DVD, which I’ve watched several times. One overriding thought came to mind and that’s, “outside the box”, which is what you have to be if you want to do something that stands out from the rest. Here’s a great example of someone saying to himself, “How can I present what I am?” and then finding a way to do it. Very creative and cool. Excellent composition and performance…well presented.”

“At a drum festival in Canada, I heard Mark inspire an audience with his musical approach and drumming control. He is a servant to the music and uses his drumming skills for that purpose. It was clear his dedication to musical expression was his main goal! It was refreshing, inspired and exciting! I am sure what you will see on this DVD will be the same results! Sit back, and enjoy the journey of musical purpose from the seat of a very musical drummer!”

Number of items in cart: 0

This site uses cookies. By continuing to browse the site, you are agreeing to our use of cookies.

We may request cookies to be set on your device. We use cookies to let us know when you visit our websites, how you interact with us, to enrich your user experience, and to customize your relationship with our website.

Click on the different category headings to find out more. You can also change some of your preferences. Note that blocking some types of cookies may impact your experience on our websites and the services we are able to offer.

These cookies are strictly necessary to provide you with services available through our website and to use some of its features.

Because these cookies are strictly necessary to deliver the website, refusing them will have impact how our site functions. You always can block or delete cookies by changing your browser settings and force blocking all cookies on this website. But this will always prompt you to accept/refuse cookies when revisiting our site.

We fully respect if you want to refuse cookies but to avoid asking you again and again kindly allow us to store a cookie for that. You are free to opt out any time or opt in for other cookies to get a better experience. If you refuse cookies we will remove all set cookies in our domain.

We provide you with a list of stored cookies on your computer in our domain so you can check what we stored. Due to security reasons we are not able to show or modify cookies from other domains. You can check these in your browser security settings.

We also use different external services like Google Webfonts, Google Maps, and external Video providers. Since these providers may collect personal data like your IP address we allow you to block them here. Please be aware that this might heavily reduce the functionality and appearance of our site. Changes will take effect once you reload the page.